Tear it Down or Restore It: “Barns of Rose Hill Historic Preservation” 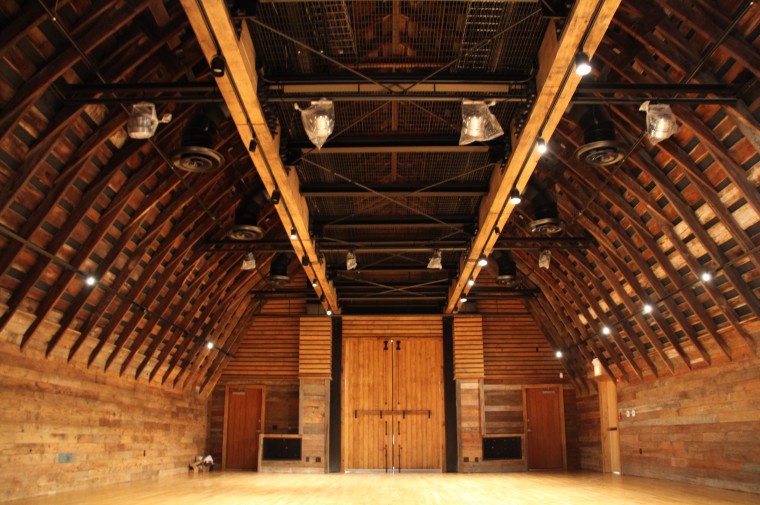 If money was the decision maker and history had no influence on our culture, then all old buildings would be destroyed and our children would have no past to look at.  A perfect example would be two old dairy barns in Berryville, Virginia named The Barns of Rose Hill.  Working on a restoration project, requires more than construction skill, it requires respect for what needs to be preserved and creativity to make new construction materials save an old building.

The mission of the non-profit organization was ”to create an active facility in our local seat of government that serves our entire population, reflects our agricultural heritage and speaks of our community character.  The Barns of Rose Hill will be a space for learning, creativity, entertainment and celebration for our own citizens and for visitors to our beautiful county.” (www.barnsofrosehill.org).

William Aikens, Vice President of H & W Construction Company said that one of our biggest obstacles was to initially disassemble sections of the barns while keeping its structure in place.  We actually purchased a truck specifically for the moving and storing of old lumber.  This  lumber removed from the large barn for project requirements, will be recycled as side walls in the Great Hall.

Perhaps the most impressive space is the 53 by 30 foot room with  a high vaulted ceiling. “In my mind, this room is the project, “says Stan Kerns, Project Manager (per Winchester Star – February 5, 2011).   To preserve the barn roof slats, 10 inches of insulation was place between the slats and the metal roof.  Inside, acoustic foam, designed to absorb sound, was placed between the old barn beams and the slats.

The biggest challenge where creativity kicked in was the stabilizing the roof while maintaining its architectural glory.  A massive custom-designed catwalk by designed by Jason Marshall of Painter-Lewis Engineering of Winchester needed to be put outside and inside the building.  Each let of the catwalk weighed 12,200 pounds.  This catwalk spans the roof area and holds up the roof and the structure itself.  Getting the catwalk into place required a 200-foot industrial crane.  Having been in the Crane business for twenty seven years, William Aikens said ” this was a difficult tedious process requiring a lot of patience.”  Very slowly, H & W Crane Service worked to position the twelve tons of wood and steel in place inside the loft of the old barn.  Progress during the job often appeared to be measured in “inches” rather than “feet”. One end was open to us, but the other end was closed…. we had to cut holes and guide these huge beams into place thru the old roof, then the catwalks had to be rolled into the interior of the barn and again by crane lifted up to connect to the legs.   Jason Marshal of Painter-Lewis Engineering of Winchester said that once in place, the new beams will provide most of the buildings structural support and allow the interior space to be free of support structure.

“We knew that we wanted to salvage and preserve the existing roof” Aikens said. “These supports will make the roof and the entire structure much stronger than it ever was in the past.”  With a red roof now in place, one will forget the effort it took to stabilize the old building.

The project remains on schedule and is slated to open in June with a September grand opening week long festivities planned.